Dianne Moffett wasn't sure if she'd make it to her next birthday.

She was a heavy smoker, consuming 2 packs a day for about 46 years. In 2014, the North Charleston resident was diagnosed with very severe Chronic Obstructive Pulmonary Disease, or COPD. According to the COPD Foundation, COPD can develop for years before noticing symptoms. Symptoms include increased breathlessness, frequent coughing, wheezing and tightness in the chest. A main cause of COPD is inhaling pollutants.

Moffett was estimated to have about 20% lung capacity. How might that feel? Imaging your lungs are a one gallon bag. Fill that bag 80% full with water. The remaining 20% is the room you have for air.

One day last summer her husband of 32 years, Richard, found her lying on the floor. He called for a neighbor and dialed 9-1-1. She was rushed to Summerville Medical Center in late June, was intubated and admitted to the ICU. After roughly 10 days in the hospital Moffett's family received the grave news she likely wouldn't survive long after discharge. The palliative care team assisted the family in planning discharge home with hospice. According to Moffett, the word terminal was written on her paperwork. 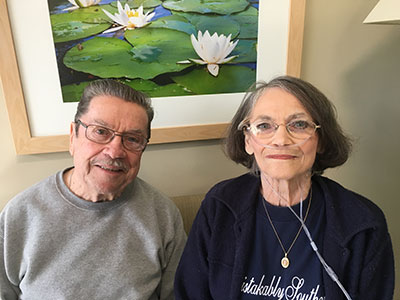 "They didn't expect me to live a week," she recalls. "My family had selected clothes and were making funeral arrangements."

Moffett did not resume smoking after returning home. Despite her bleak prognosis and debilitated state she decided she wasn't ready to go. A few months after discharge Moffett was well enough to begin Pulmonary Rehabilitation at Summerville Medical Center. Pulmonary Rehabilitation provides education and supervised exercise for patients with lung disorders. The goal is for patients to have decreased symptoms of disease and improved function in daily life. The program typically consists of 2 visits per week for 6 weeks. However, patients may attend the program for up to 16 weeks.

Upon starting the program last October, Moffett could hardly walk 75 feet to the mailbox and back. She started with 20 minutes of supervised exercise twice a week. Carrying her portable oxygen behind her, Moffett worked her way up to 40 minute sessions twice per week.

Since beginning the program, Moffett has graduated from hospice. She can walk into the commissary without riding in a cart. She has enough energy to cook dinner and can drive short distances. Despite these improvements, she is still on oxygen 24 hours per day.

Moffett celebrated her 66th birthday on October 23rd, a birthday no one expected her to see. "I've had a very good life," she commented. "I just want to see my grandbabies grow up."

A recently Pulmonary Rehab graduate, Moffett still hits the rehab gym twice a week as part of the Stage IV Pulmonary Rehabilitation program. She is an inspiration to everyone in the program.

Her advice to smokers is simple: "Put it out. It's not worth it."

For information about the Pulmonary Rehabilitation program at Summerville Medical Center call (843) 970-5340.

What dense breasts mean for your cancer risk

10 easy ways to eat Mediterranean on a budget

How to avoid germs throughout the day

COVID-19 phobia? Why you should not delay emergency care